and we turned around...

To all who've asked, we said our plan was to reverse course and head back whenever we decide to... well I guess that was today at Chesapeake City, MD.

We had loose knit plans to go up to NYC, Long Island Sound, and beyond, but early this morning and unable to sleep,  I pondered the circumstances, ran the numbers regarding time, money, and our good weather window, looked at the forecast/radar on the internet , and decided to wake Mel at 5:00AM to discuss our immediate future. Around 8:00AM a severe thunderstorm blew threw and both of our cell phones started alarming a tornado warning... Omen? The storm took the same route as our intended course down the Delaware Bay. The tornado did much damage on the Jersey coast.
We both decided Long Island Sound and New England were to be saved for another time... maybe next year. That dream is still alive and life is good... no whining.

So if you follow our tracks today they will lead you away from the Delaware Bay and way the hell up the Sassafras River to Georgetown, MD. 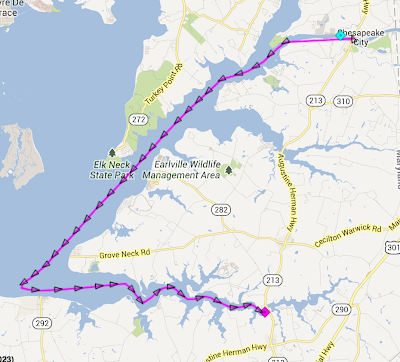 It's one of those quaint little eastern shore towns with pretty rolling hills topped by appropriately eye-catching homes with grounds that visually blend into the river.
It's blissfully quiet for now, not much but the sounds of egrets and eagles with the distant hum of an outboard motor somewhere off in the distance, but the cruising guides say the weekend will bring out the ski boats and jet skis.
We'll have moved by then, but it's nice for now.

So as we head south we'll take our time to explore those interesting locales we passed by on the way up. Maybe back to Annapolis; just because we liked it so much. There was much we still wanted to see and do there. Maybe visit our friends in St. Michaels.

I'll have to admit, we're disappointed... We should have left in May, not July... but life gets in the way sometimes and it's the only life we have... so that's okay.

Sometimes, things work out as they should.