We had great intentions.

Pulling into Beaufort just in time to make the inlet in daylight, we forged ahead with a weather forecast that appeared to be near perfect... and it proved to be so for about 3 hours. 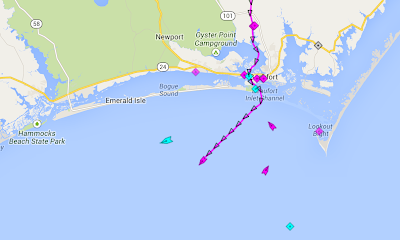 The seas looked so good out from Beaufort that we dropped Plan A and went with the quicker route toward Charleston.
And, that's where it all went to shit.

The farther out we went, the worse it got. At about 10PM we made a course change to head back west toward shore; in hopes of finding smoother seas and some sanity.

So Plan A was right all along. Should've stuck too it. 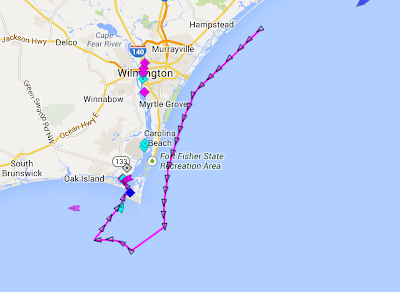 We still had to head east and dig back into it to get around a 15 mile long shoal—and that turned out to be the end of our long run with Two Drifters.

Rich and Ronnie have 10 days to move their boat to Florida... we don't have a schedule.
As we passed through Frying Pan Shoals Slue and we were still having our asses handed to us, Crew Istaboa made the call to change strategies and head back to shore to seek protection from the wind.
Even that didn't help.
So we bailed... and while we're comfortably tied up at Southport Marina off the Cape Fear River, Two Drifters are still out there slogging through the muck.
We truly hope the forecasts have finally been realized and Rich and Ronnie are having a beautiful evening amid very calm seas.

I just read an email from Active Captain where they made a point that applies well in this situation... The *most* dangerous thing to have onboard is a schedule.

ps... got some great pics as were leaving Beaufort. Will process later.