A few thoughts and observations 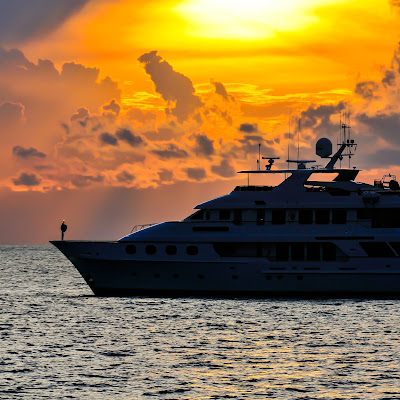 Radar and I are up early this mornin', watching the sun rise over the top of a big yacht named Sea Bear, it's a gonna be a nice day.
Looking out over the stern of Istaboa, it occurs to me that life seems to be getting better for many folks and not just the 1%. marinas are filling up with big yachts where just a year ago they had more empty slips than full. The size and number of vessels has increased dramatically.
On the docks are marina worker bees swarming around the boats like in years distant past. Older boats are being fixed up or traded in for newer and bigger ones. Lots of upgrading and polishing, lots of captains and owners specing out projects. With a more upbeat cadence as they walk the docks, there are smiles on the faces of the boat fixers like I haven't seen in a long time.
The marina operators are all reporting the best year they've seen in more than a decade. Some are getting cocky again, like they were around the turn of the century. (Yep, we've been doing this for a while.) Maybe they'll remember what happened last time and not let this new found prosperity cloud their humility. Probably not.

And such articles are starting to appear —


Now Do You Believe We're In A New Tech Bubble?

Yeah, times do appear to be a run-up to a redux of the late nineties. Remember $100.00 Limited edition bottles of water harvested from melting polar icebergs and $1000.00 Cohiba cigars? (The good old days of my generation.)

I recollect something an old fishing boat captain from Panama City told me years ago; we were leaving Carrabelle, FL about to take our SeaRay across the Gulf of Mexico for the first time and his advice was, "Just don't get excited."

Hopefully this older age I'm stepping into will bear some wisdom and we, "don't get excited".

We haven't yet, though we are enjoying the sun while it shines.