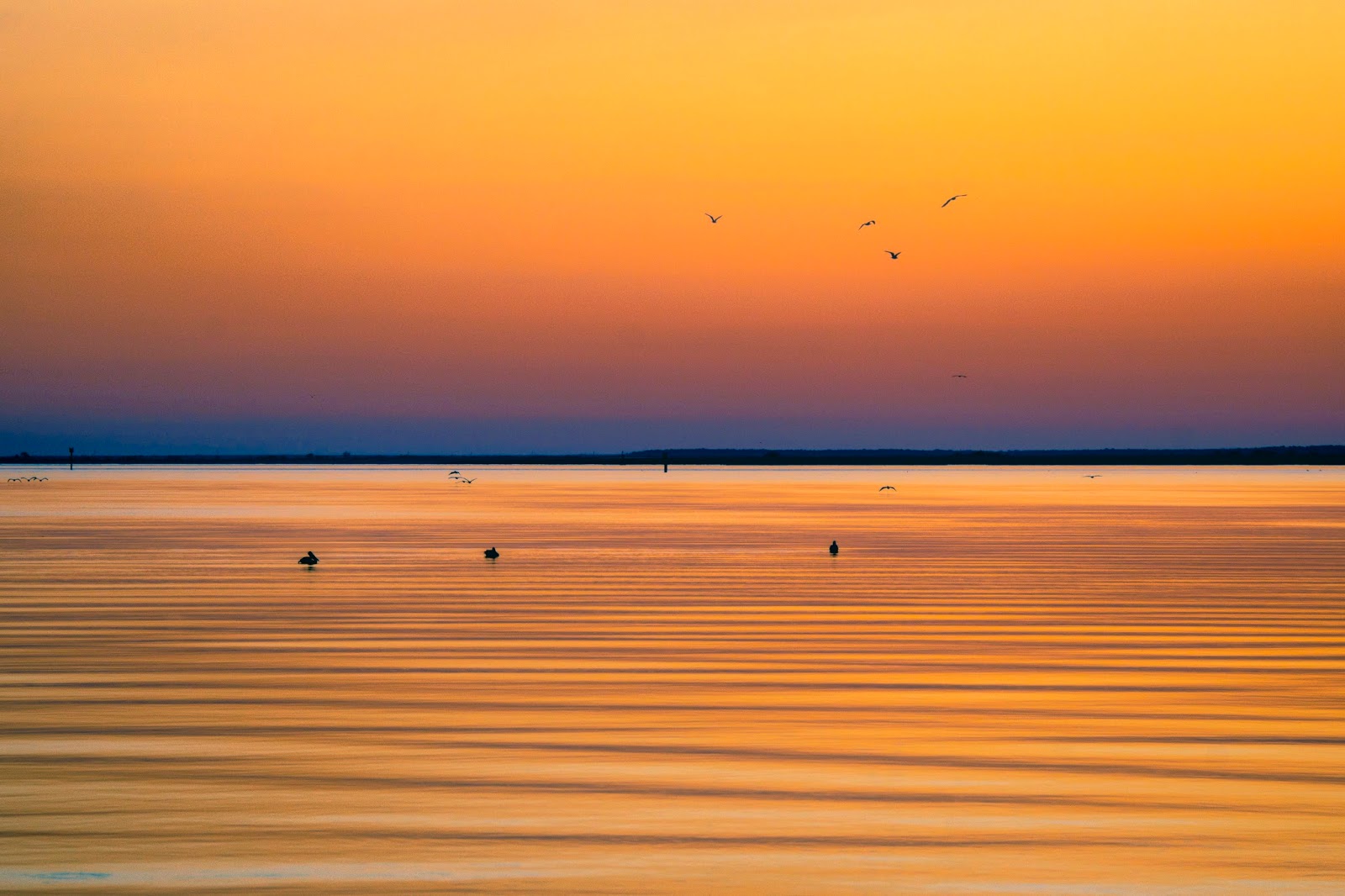 Brunswick, GA — Tied up at St Simons; a Golden Isles sunset reflecting off the sound, pelicans and gulls ending the day doing what it is they do, all appears peaceful. Though, just a couple days ago, Thanksgiving Day, this was a different picture all together. A damp northerly wind was blowing hard and there was no sunset to be enjoyed, just gray, grayer, then darkness and cold.

In several ways, this trip is winding down.

Leaving Beaufort: With the winds blowing and seas in the unsettled state they were in, the choices were to run the ICW or stay put. Staying put was no longer an option, so it was decided, the long plod down the ICW with all it's bumps and curves was the way home.
When piloting a deep drafted boat, motoring south and winding down the Atlantic Intracoastal Waterway, one must contend with the many twists and turns, there are shoals around every ocean inlet to be taken seriously, and almost every mile of the way is some obstacle to cope with. Most are not as precarious as reputed (ActiveCaptain), but all bets are off, you're compelled to give these complications your attention or one of them could make for a very bad day.  Stress.
(Hindsight is 20-20: Unless there's an unusually low tide, if you stay in the center of the channel there's little to worry about.)
The stretch between Beaufort and Cape Fear is crossed with low hanging bridges that must be lifted up or swung open to pass through, all these spans across the waterway are seemingly set up on schedules that are timed to penalize any boat requiring an opening—of course a fierce current is always pushing as you approach them and the incommunicado bridge tender's watch invariably runs 5 minutes slow.

Needless to say, if one has taken on the mindset to get home, this is a chore, and this portion of the ICW is not much for stopping and smelling the roses so...  Push.

Past the Cape Fear River and back into the ICW, St James Marina is just a short distance past Southport. A nicely manicured marina with an excellent restaurant onsite. 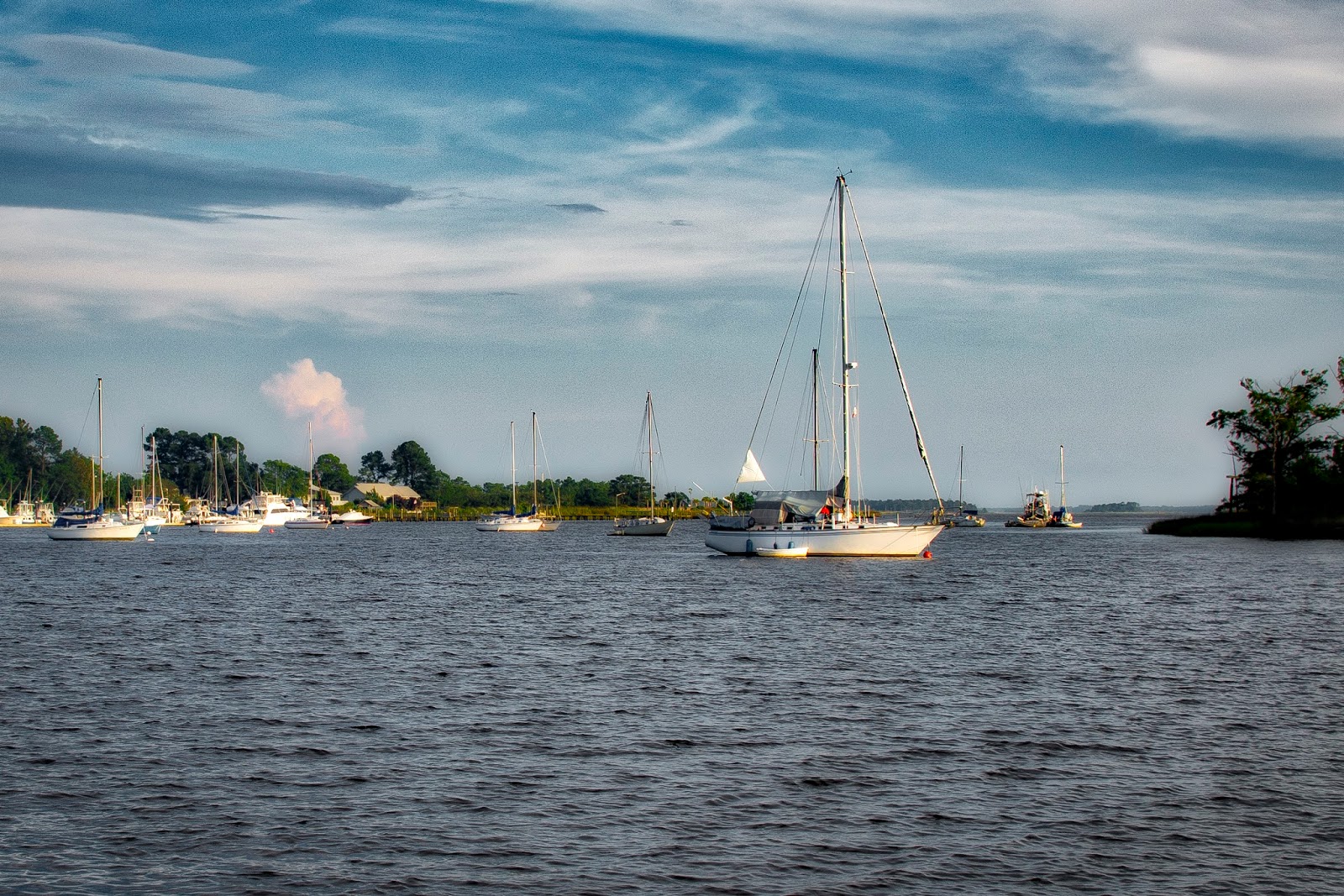 The Southport to Georgetown, SC run is not nearly as dreadful as it's reputation. The ICW water's fairly deep and there are fewer shoals to overthink. Once pass Myrtle Beach, other than strong currents, this bit is not bad at all. It's nice, actually.
Osprey Marina is a good stop. Tucked back into a forest of moss draped low country cypress trees is a little sanctuary of a marina. A pleasant stop that's out of the current and staffed by nice folks who are happy to give you a hand tying up.
Back in the ICW and a full day's run in deep water is Georgetown, SC. Harborwalk Marina is the nicest and closest marina to the restaurants and shops that Georgetown has to offer. A charming little town that's at least worth a couple of days.

The next morning, looking across the harbor at a stack towering over a nearby mill, the winds have settled, the smoke bellows straight up towards the clouds.
The run out Winyah Bay and into the ocean is uneventful as is the run into Charleston and all the way  up to Ashley Marina. 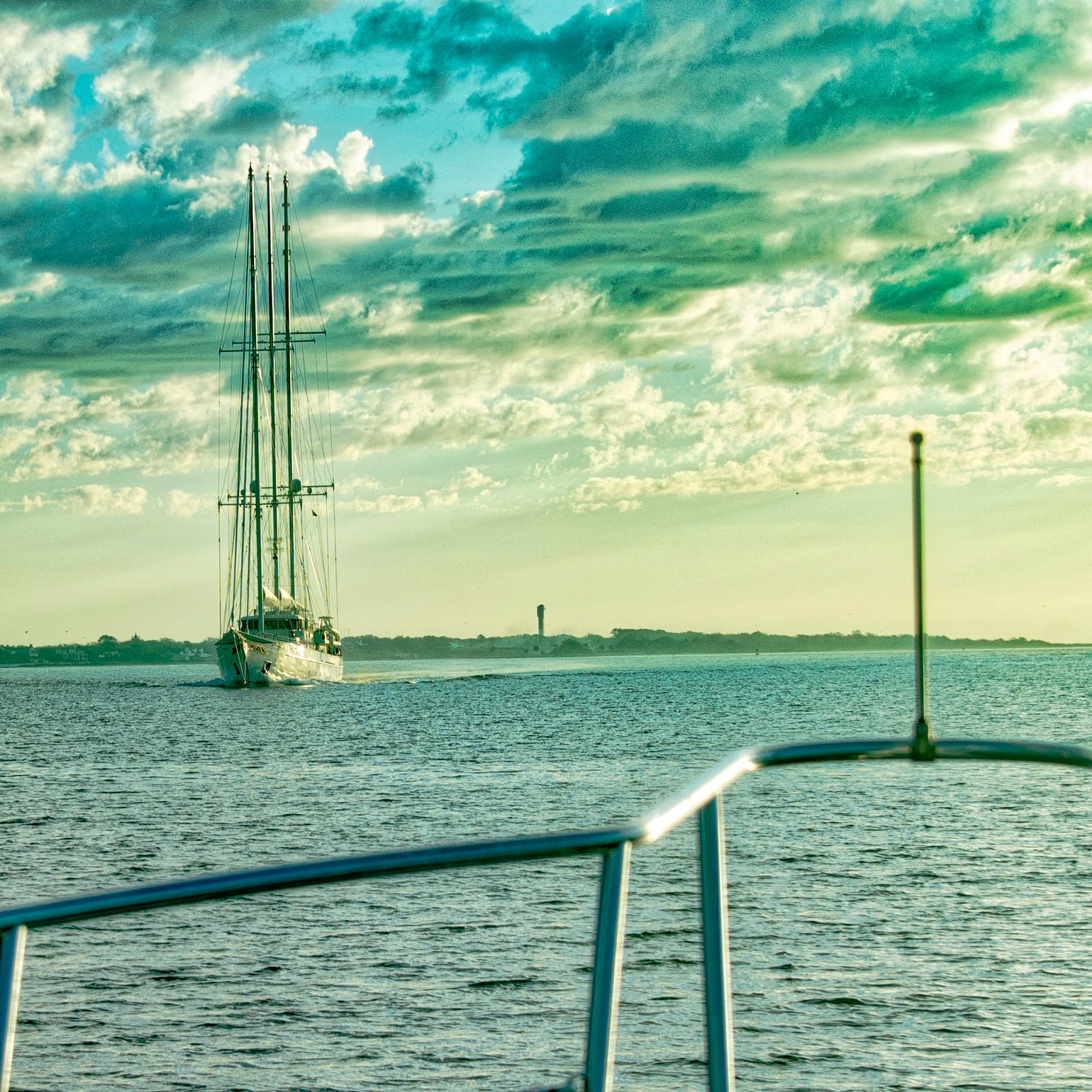 The winds were relenting and the seas stayed somewhat still. Leaving Charleston Bay and easing out the inlet, all remains calm and the next leg down to Hilton Head is an easy day.

Passing by the 140' Sailing Vessel ~ Athena 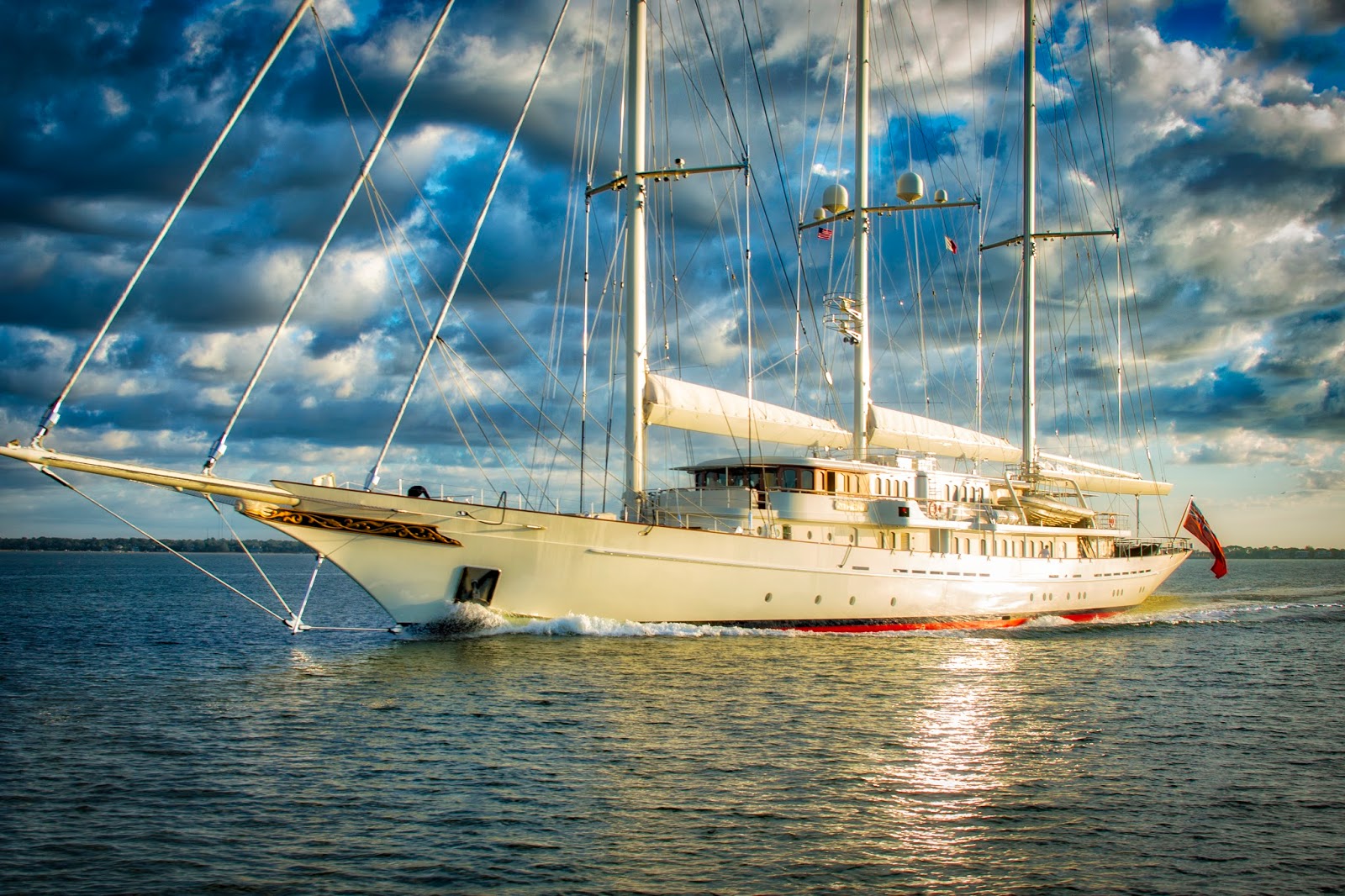 Soon however, the blow's back and the affected seas have picked up considerably; the pleasant days in the ocean now turn less than so, but still better than working the ICW.

The next run, Hilton Head to Brunswick, offered up quite a bit more texture. 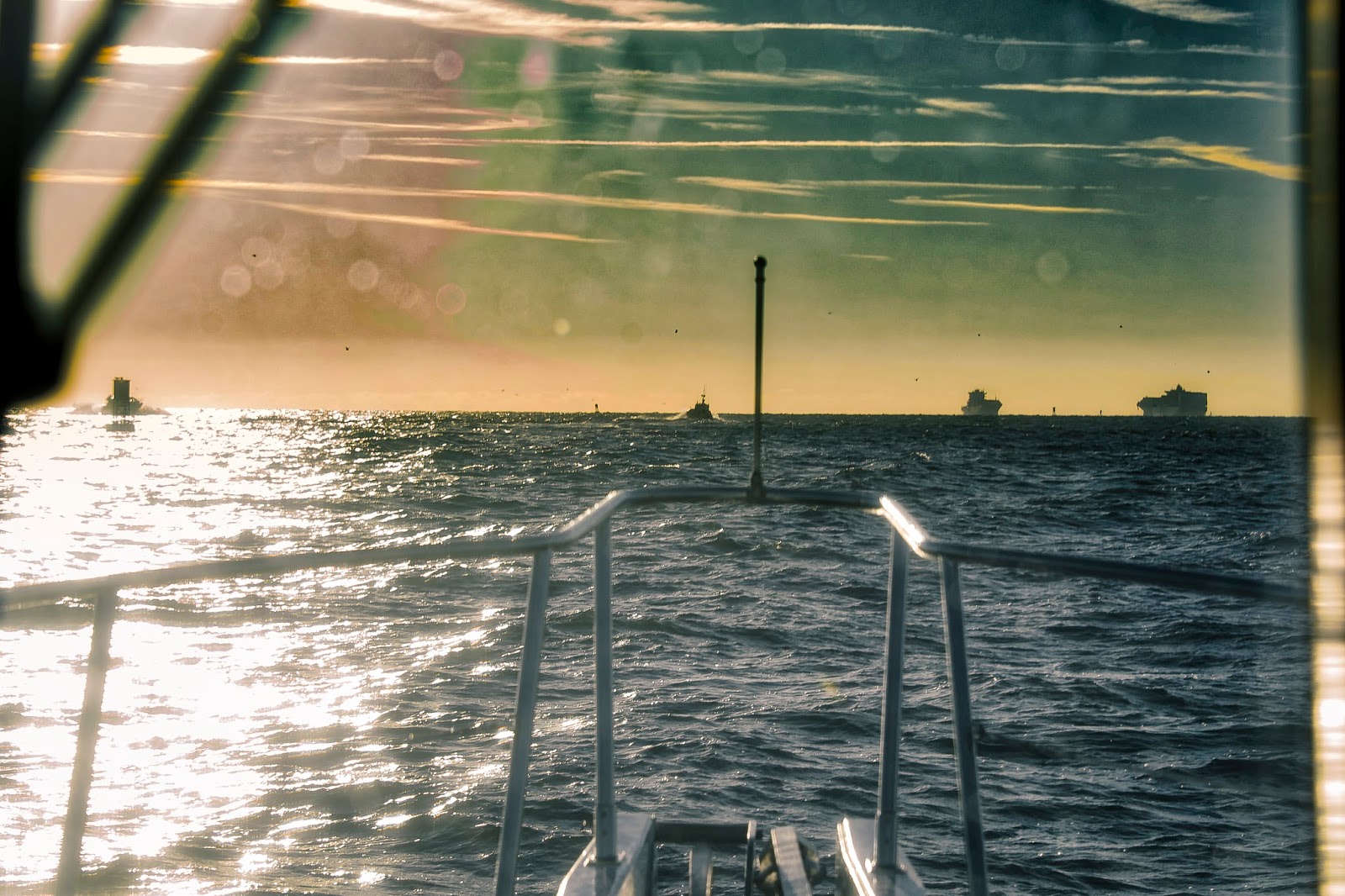 Plowing away from Hilton Head's Calibogue Sound and out Tybee Roads, the approach was rough and busy. Turning south, the northerly winds and the following sea brought on nice speed; St Simons Sound got closer sooner than expected.

That same strong north to south wind created continuously tall nasty breakers that were crossing the channel all the way past St Simons Island. About 7 miles of contending with beam bashing seas makes this a less than pleasurable approach.

Though once it's done - It's done 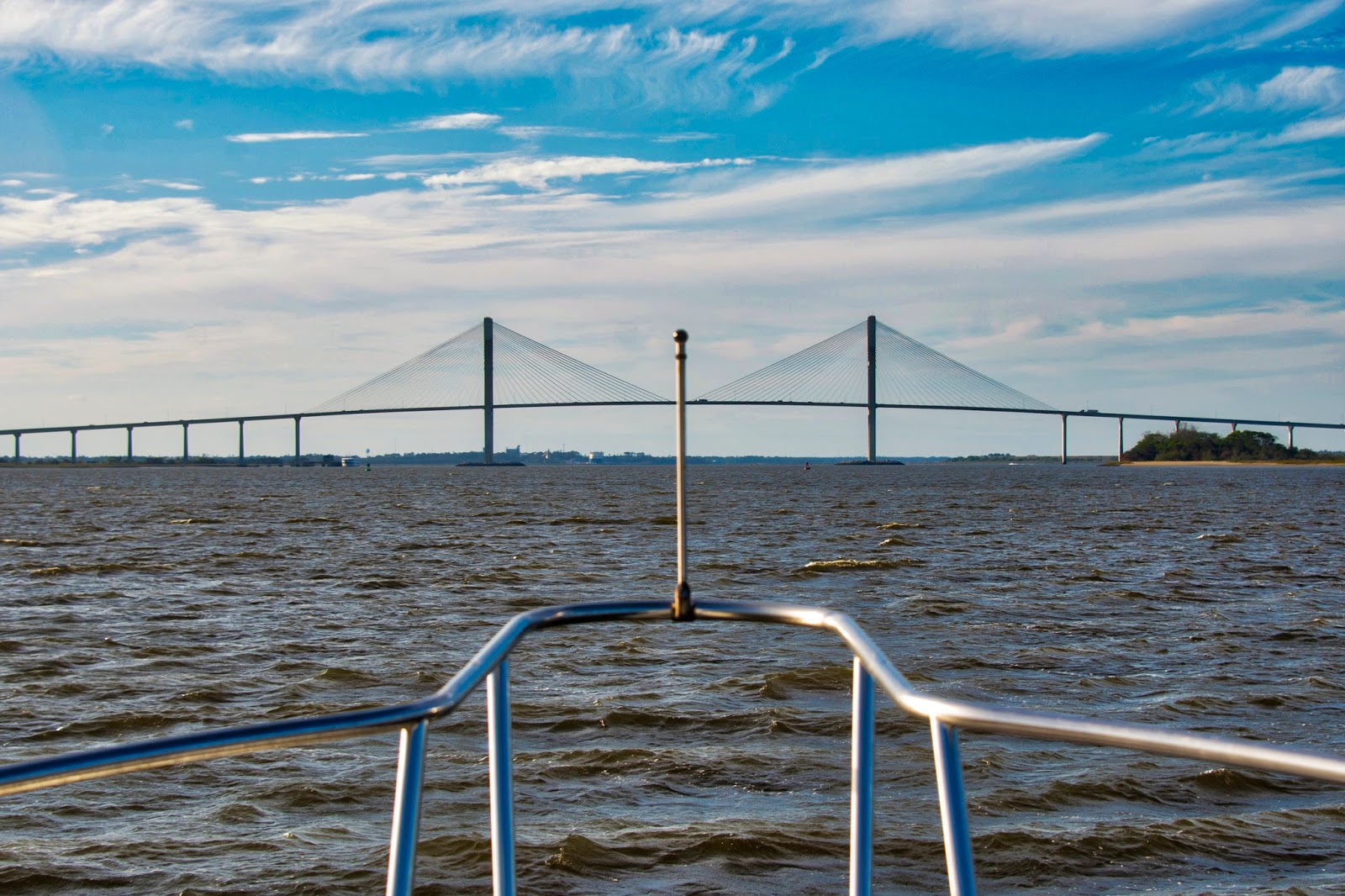 Easing under the Sidney Lanier Bridge you'll find Brunswick Landing Marina. A nice community of a marina that's quite large. - Free Beer 24/7 - Nirvana for many.

We stayed at Brunswick Landing for a few days and had a nice time while getting a bit of work done. We've tied up here before but it was a long time back. 14 years ago we brought the original Istaboa, an Offshore Yacht, to downtown Brunswick and celebrated Melonie's mother's 80th birthday. The place hasn't changed much since then... just the names and faces. 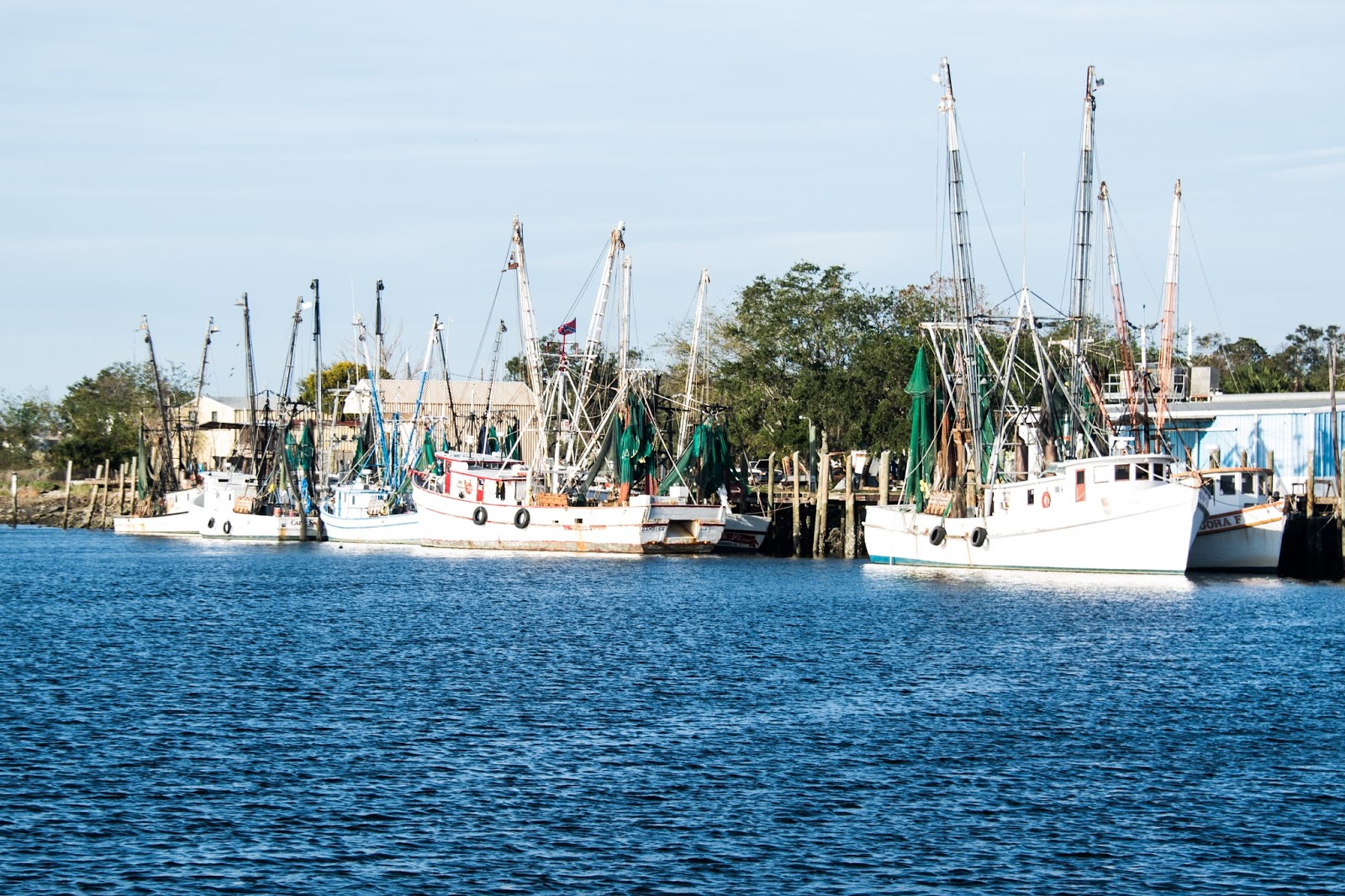 Thanksgiving was aboard. Excellent Roast Beef for dinner then a few episodes of the Netflix series, Alias Grace. Brunswick Landing did put on a nice Thanksgiving feast for the boaters, but it was rainy and cold out so we decided to lay low with the pups and enjoy ourselves.
We've now moved over to Morningstar Golden Isles Marina to stage our departure for Florida as soon as possible.

Brunswick marks the end of a long nautical business trip. A campaign to visit the increasing number of marinas that we do business with as well as those we'd like to build a relationship. We've caught up with many old friends and made several new contacts. It's time to stop for a while and take stock of our labors.
This little marina WiFi company is a win for all those it touches; we're proud of onSpot and it's service.

This trip is also winding down for Mel and me.
Personally, I'm ready to be back home in Jupiter. To walk with my dogs on the warm sunny beach and sleep in a king size bed, to spend all the time I want in a large hot shower and have a car at my disposal; all the trappings that Mel and I happily left behind last May.
Mel is not quite as pleased as I am about tying up Istaboa, but me thinks she'll enjoy all these things as well ... in time.

This life is in our DNA, it's not a hobby, nor an item to scratch off a bucket list, but sometimes, stepping away makes it all just that much better.

Something I wrote a few years back:


And, yes I know, there are those who feel there's no better life than full time living aboard our boats, however we've been doing this cruising thing for many years and we like to think of the boat life as a dream being realized. Though sometimes, for us anyway, it's fun to hop on the bus and say, "there's no place like home", and our dream remains floating somewhere awaiting our return.


So yes, we're happy to be heading home and now, conveniently, the boat is just minutes away and we see it almost every day.
There are a few projects needed to be done; a radar that blinks, electrical gremlins, but all in all, since the start of this trip, Istaboa's been as kind to us as we've been to her. She likes to be run and enjoyed; we've been doing just that.

Like us, she also enjoys warm weather and Jupiter's pleasant winter is getting closer each day.

There are Palm Trees in our future.