This year we've not felt the urge to push ourselves or the boat. There's no specific plan other than to be north of Florida and we've accomplished that already. Hoping to resist complication and just be, we're patiently allowing chance to influence our travel plans for the next few months. It's said, “Luck is what happens when preparation meets opportunity”.  So we'll stay prepared and opportunity will likely appear sooner or later. If not, we'll just keep bumping around till it's time to go back to Jupiter.

No, we'll not put a lot of distance behind us this way, but we're not sure where we're going anyway so it probably doesn't matter. 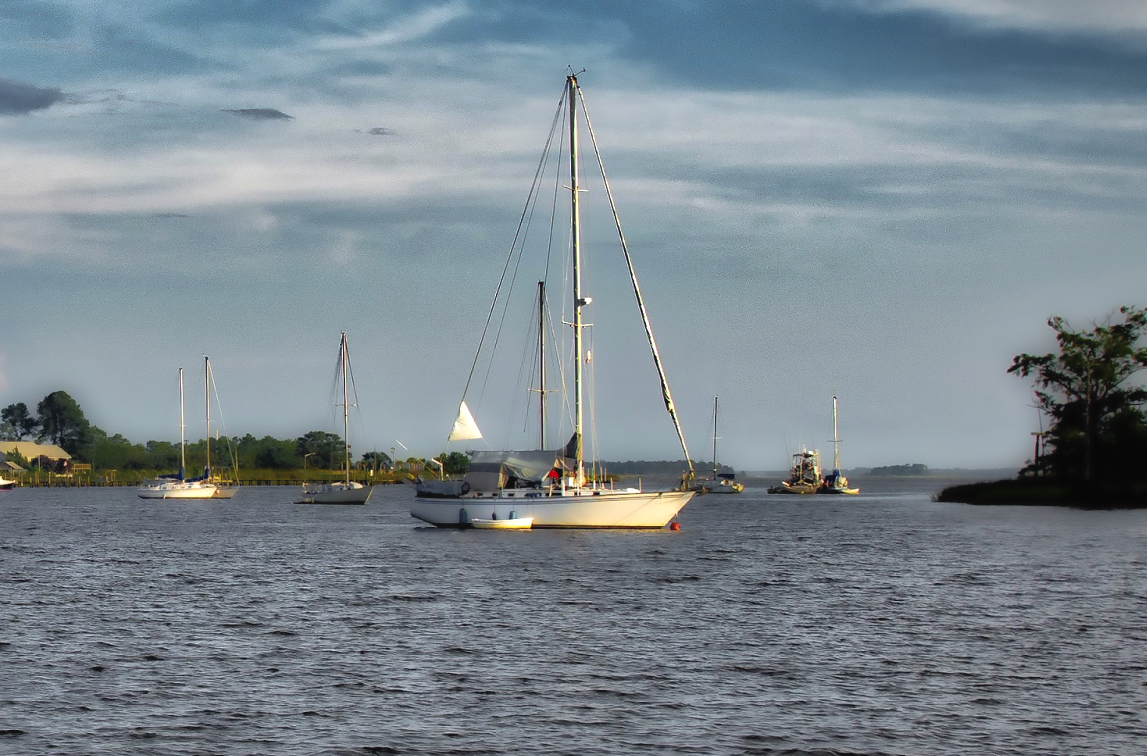 On this day we're tied up at Harborwalk Marina in Georgetown, SC. The second largest seaport in South Carolina, though it's more a sleepy little fishing village.

We've spent time here before and found the old seaport town to be a friendly place. Just off the beaten path and very quiet, there's a pretty little harbor that provides protection and relief from the strong currents of Winyah Bay. On the other side of Front St is a charming old neighborhood that's covered up in history; many of the well kept homes were built in the 1700s. Down the street we've found an assortment of good restaurants and shops.
Reckoning the whole might be better than the sum of it's parts, chances are, we'll become better acquainted with Georgetown.

The getting here has been good. We're enjoying the trip and the boat seems to be happy as well. The long run up the Florida coast was the right call, but for now we'll do a few short legs and take it easy. We've jokingly tagged this portion of our cruise, The Shrimp and Grits Run — for good reason. 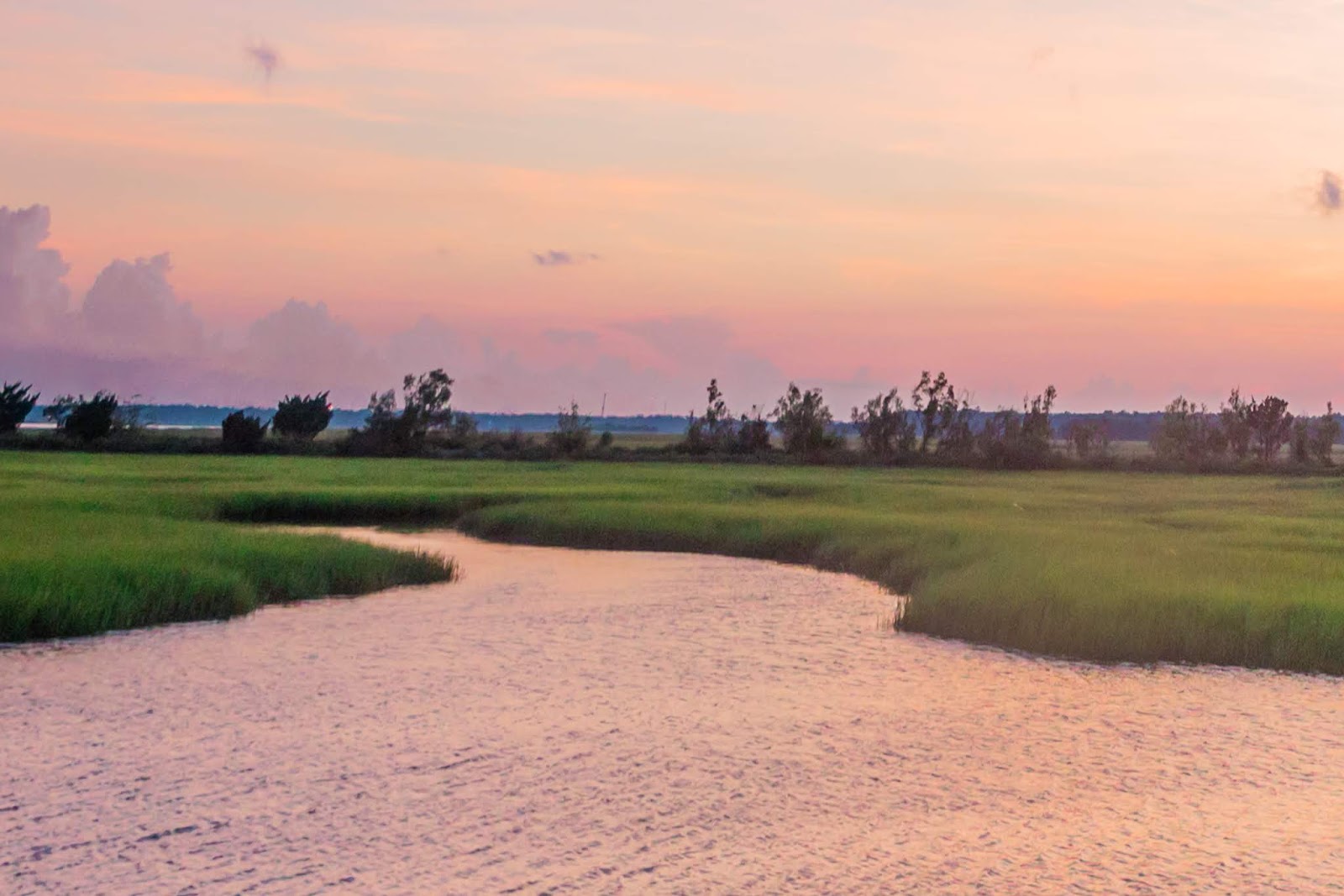 Done with Florida and arrived Georgia, we stay in the Brunswick area for a few days. Having been Mel's hometown and much time spent here in the past, it's familiar to us.

Over the years there were many lasting memories formed in Brunswick. Most of them simple pleasures like hanging out with family, heading shrimp, catching and cleaning crabs. Our best memories are from the many Christmases we spent here. These big holiday get-togethers always ended with the traditional Oyster Roast. At the Riverside house on a cold night, family and friends would gather around a hot oak fire, tell the same old stories, laugh, and drink lots of beer as we shucked and devoured bushels of fire roasted oysters. Mel's Dad loved putting all of this together and he worked hard at it: Sourcing the oysters, building the fire, even cleaning up the aftermath was a task he didn't mind at all.
Those were good days. Yes, Brunswick is familiar to us. 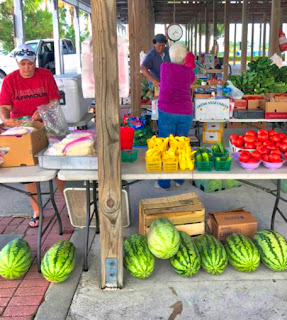 Like many times before, we shopped the Farmer's Market on Saturday morning to buy fresh peas and  boiled peanuts. Local Georgia Cracker gourmet delights.

Next, we motored over to St Simons Island and Golden Isles Marina. Borrowing the marina courtesy car, we had lunch at Barbara Jeans - Shrimp and Grits and Crab Cakes.
A St Simons tradition, a fine little southern style family restaurant.

A little work was done for the marina then a quick weather check showed the seas were gonna be favorable. It was decided to move on to Hilton Head.

Leaving St Simons at first light on a falling tide we caught a nice ride with the current all the way out the long ship channel. 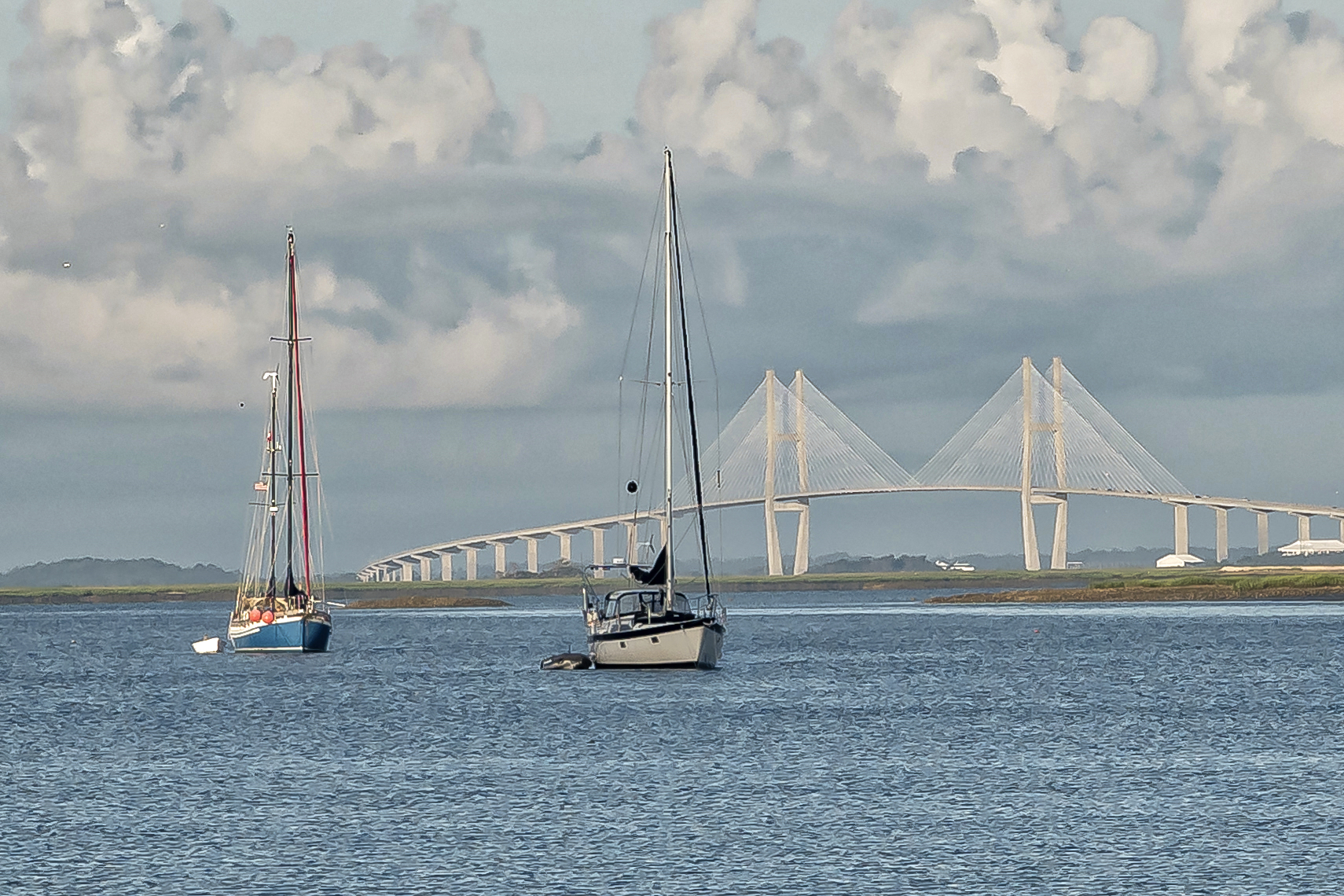 A few hours into the trip our favorable seas started changing as did the wind. Now a head sea, but not bad, just sloppy enough to make sure I washed the boat once we arrived at Harbour Town Yacht Basin. 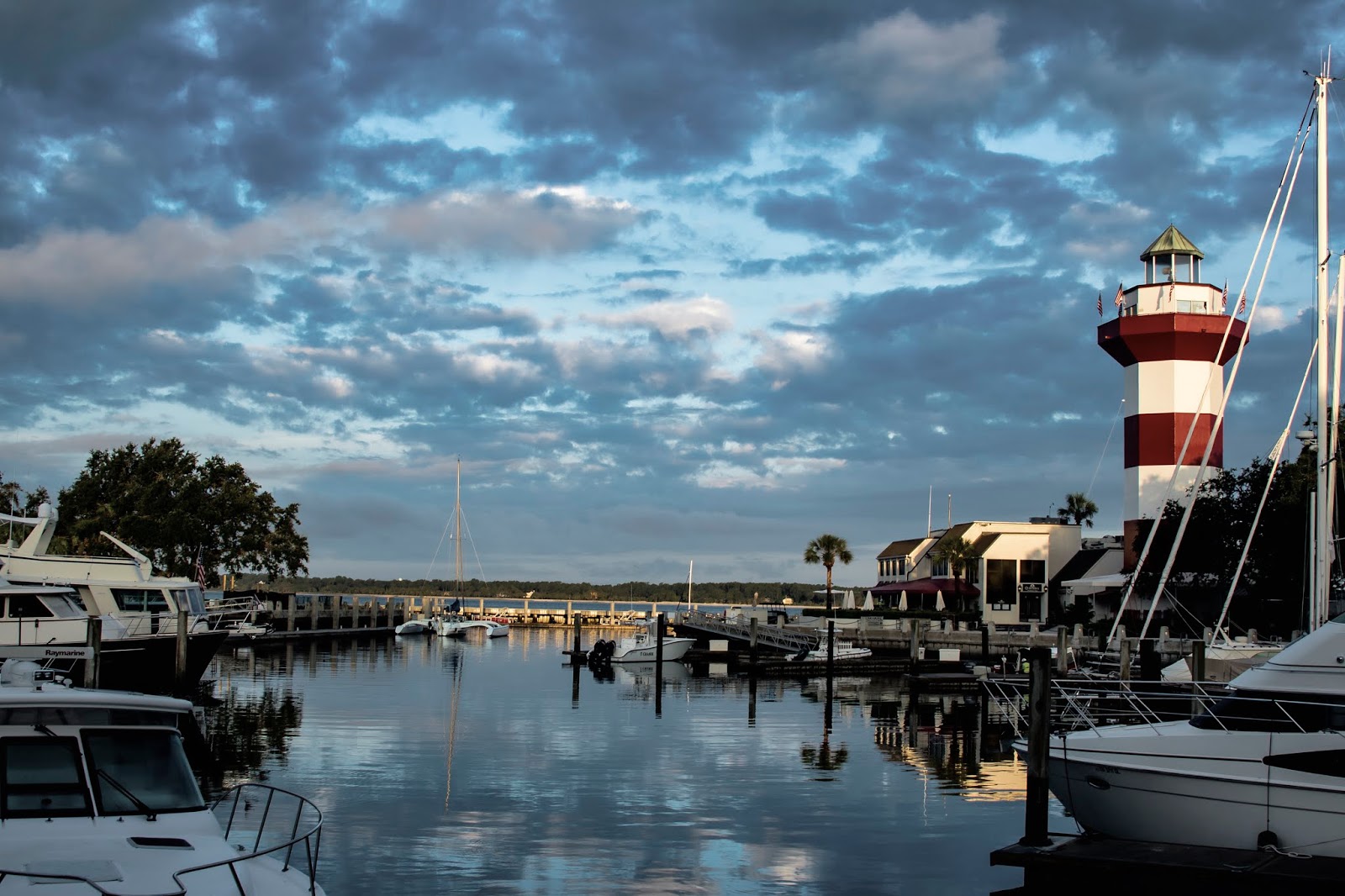 By the end of the day the waves had turned fairly chunky and we butted our way round Savannah into Hilton Head.

Being the 4th of July, Harbour Town and Sea Pines Resort was swarming with lots of folks doing what lots folks do on Independence Day. That night, much to our young pup Muddy's dismay, there was a world class fireworks show.
We always enjoy our time here and particularly like the resort's restaurants. (Yes, Shrimp and Grits and a bowl of Gumbo.) This is a very well managed, award winning, marina. Harbormaster Nancy Cappelmann makes sure everything is top-notch. 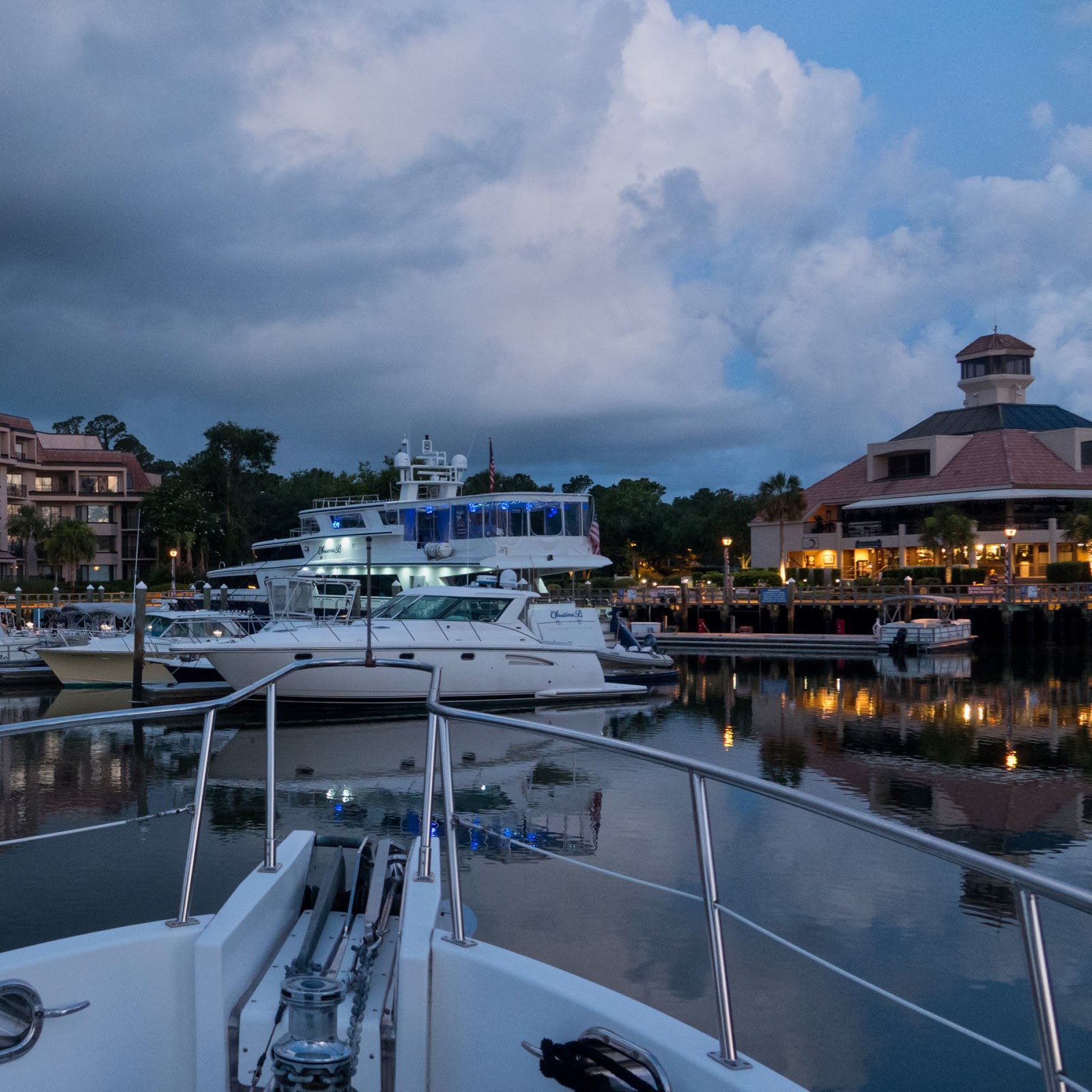 A few days later we moved over to Shelter Cove Marina. Still on Hilton Head island, just further inland and up a creek.  Shelter Cove is pretty cool. many places to eat (Shrimp and Grits), a coffee shop, a French bakery, and other businesses that cater to tourist. At one time there were two different bands playing at two different restaurants and both singing different Jimmy Buffett tunes. Cheeseburger in Paradise on one side, Margaritaville on the other... - I guess some things never change.

There was a strange weather anomaly, that soon became Hurricane Chris, sitting off the Carolina Coast and it wouldn't leave. At first we thought it prudent to hang out at Hilton Head and keep and eye on the storm, so we moved back to Harbour Town. Waking the next morning and checking the latest weather info things looked much better so we decided to take off and head North. Charleston was our next stop and we needed to be there at 4PM for slack tide. (if you've ever boated in this area you understand the slack tide thing.)

All day long the winds were calm and the ocean was slick, but as we got within 10 miles of Charleston the breeze picked up. Still nothing harsh, however off to the west dark clouds were building up over land. By the time we reach the ship channel everything changed. Wind gusts of 25/30 were turning our nice slick ocean into angry gray seas; a full blown thunderstorm was hovering over the entrance.

Weighing the options of circling around out in the ocean and waiting for the storm to pass or pounding our way up the channel, straight into a threatening squall — we chose the latter - hoping for the best when we arrive on time with slack water. Damn the lightning, full speed ahead. 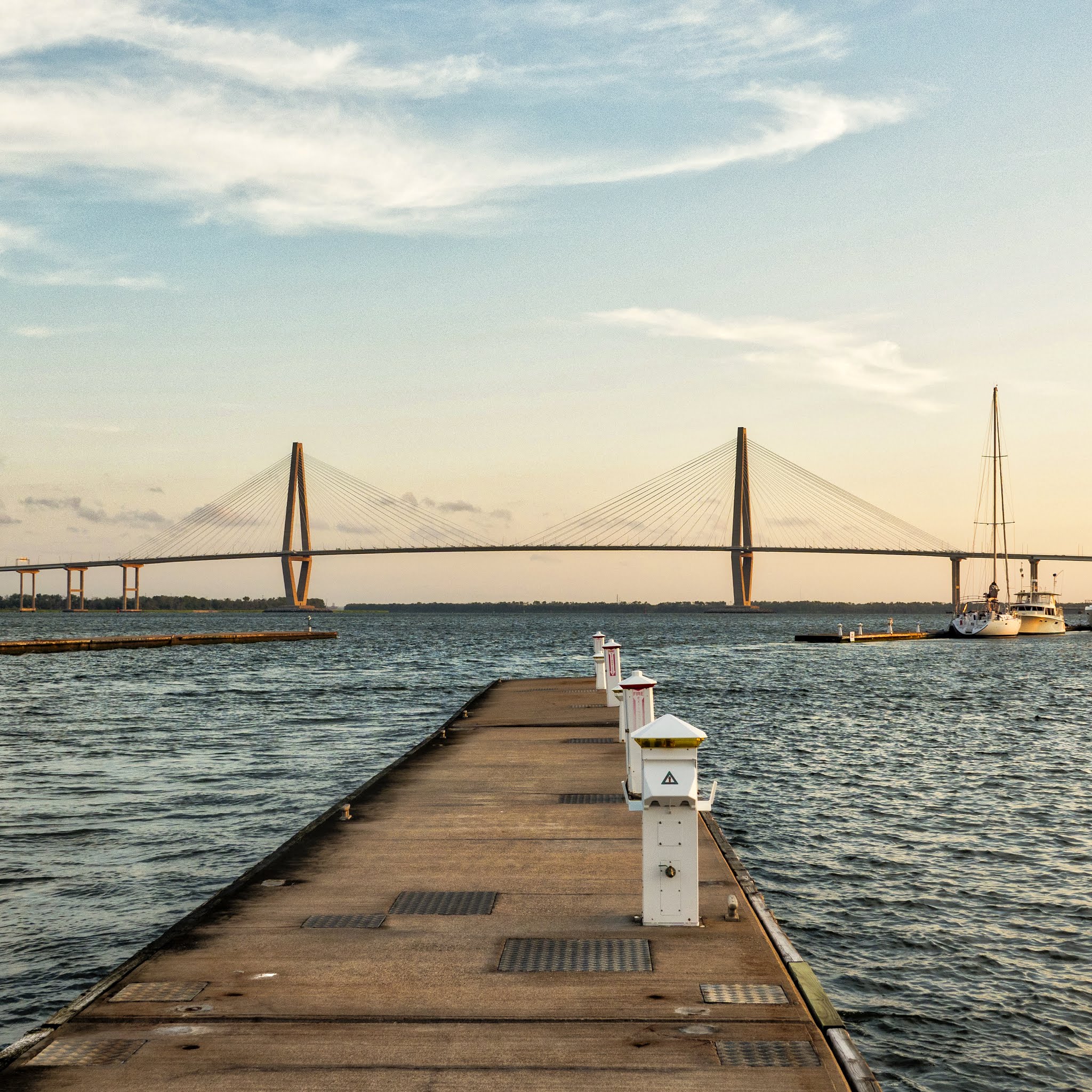 And... that worked out well. In drizzling rain we eased into the marina at exactly 4:00 and tied up. Then the skies cleared.            Yes, all's well that ends well.  ☺︎
It was interesting tying up at a marina with an Aircraft Carrier - Patriot's Point 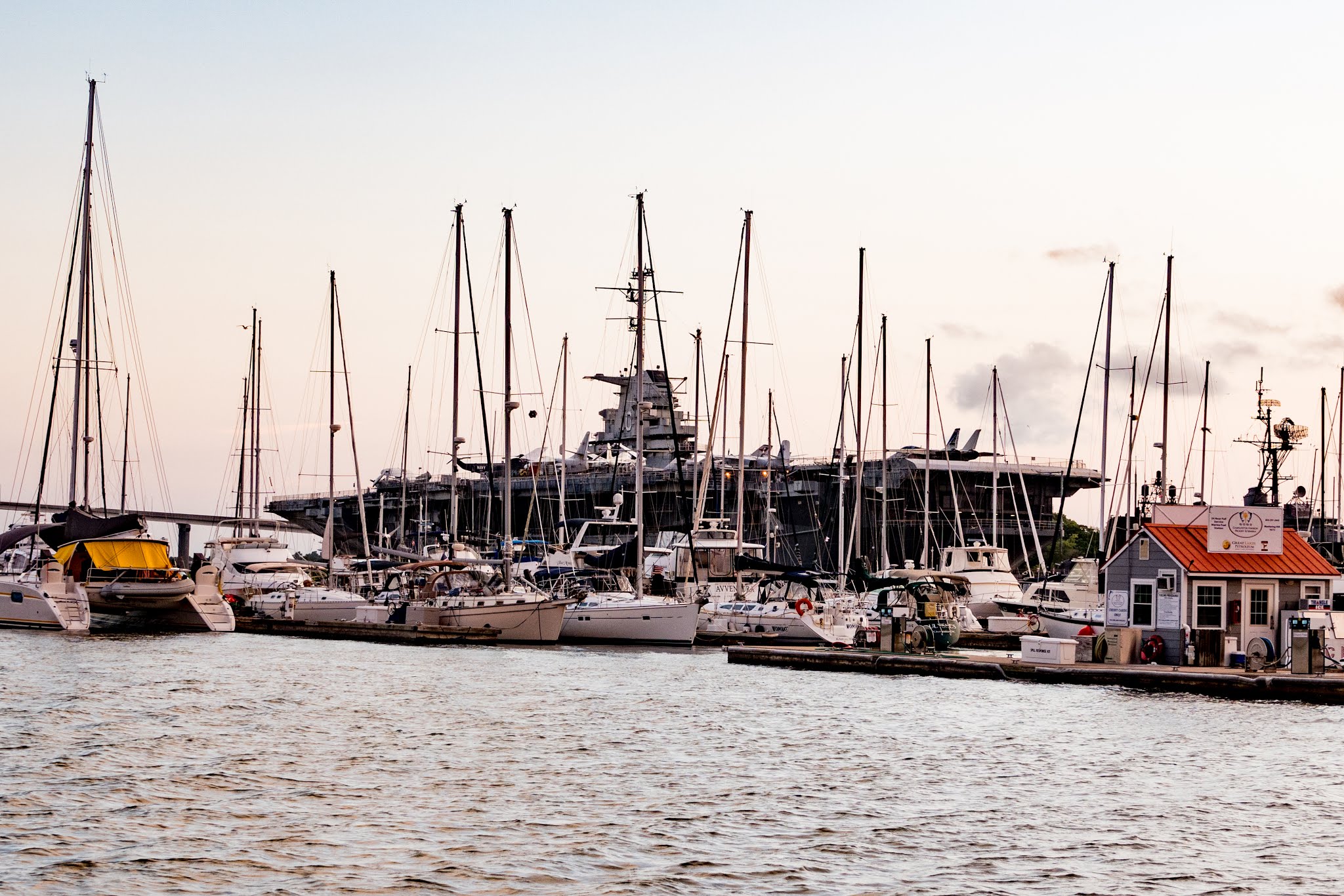 Charleston Harbor was full so they put us out on the far edge. It was rough. All night the boat would rock and heel over from the wakes of big ships passing by. We woke the next morning, finished doing what we came for, made the necessary calls, and moved a few miles up the ICW to Isle of Palms Marina. 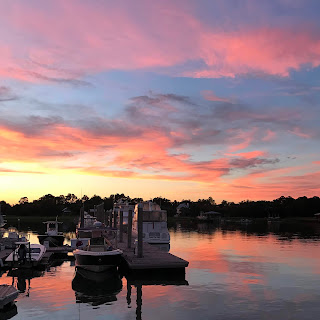 Isle of Palms Marina isn't really anything exceptional, however on a sunny Saturday afternoon it's the center of the universe. Hundreds of small boats use the ramp to load and unload. There was a band playing outside and 2 restaurants (one serving Shrimp and Grits with Alligator Gravy) and a nicely stocked tackle/grocery/deli. It was incredibly busy, but not in a bad way. Everyone was friendly and courteous and a good time was being had in bulk. It was fun to watch.
Putting a double finger slip to good use, I was able to get to Istaboa's port side and easily do a badly needed cleaning. It's disturbing to find what happens to the forsaken side of an asymmetrical salon boat. Out of sight, out of mind. 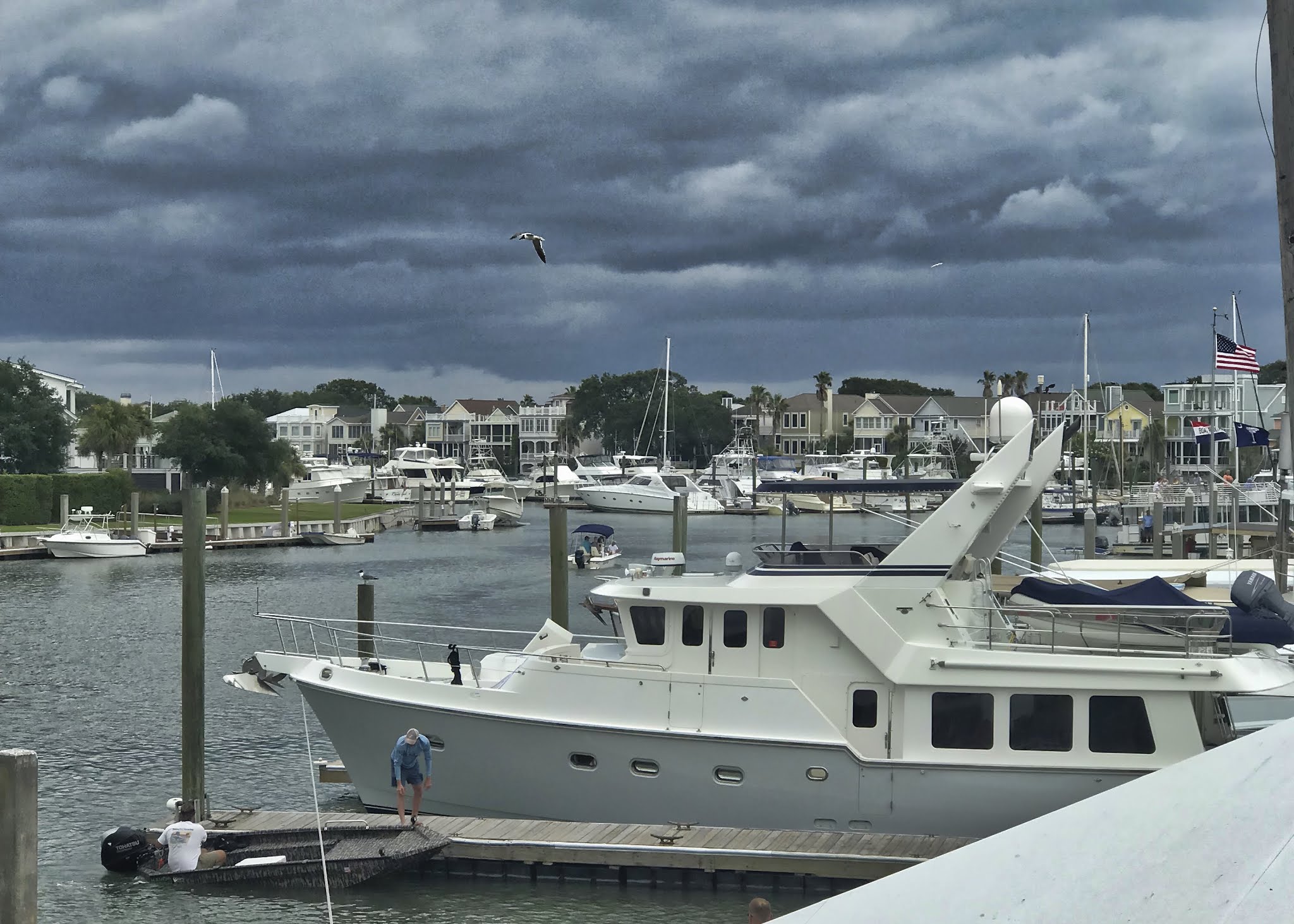 We stayed here for 2 nights then left mid-day to run the skinny ICW to Georgetown. McClellanville is the snag on this stretch with a reported 4' water depths at low tide, however I  believe this is falsely reported. (Boat geek stuff) We went through 2 hours after low tide and never saw less than 3.5' under our keel — (which by my calculations would make it 7' MLLW.)  We were fortunate to be leaving on a rising tide; the current pushing us all the way to Georgetown. When we hit Winyah Bay, we were clocking 12 knots. Got in at 6:30.

So here we are, Georgetown - livin' easy.  It's a cool little town and we're thinking we should to get to know it better.
So far every restaurant has been better than the last. (wonder if they have a gym)
The best to date— Shrimp and Grits with Pork Sauce — The River Room. 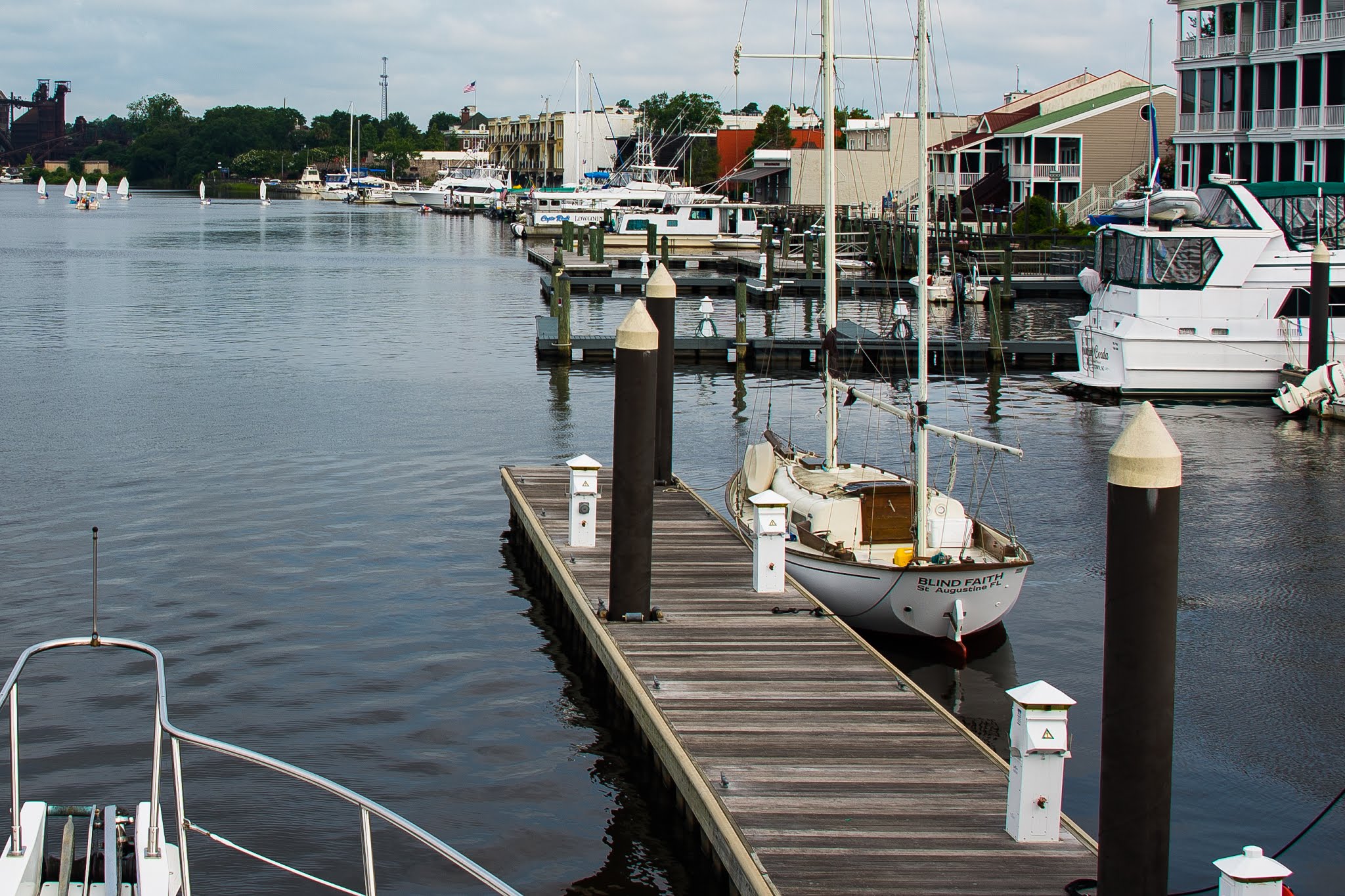 Harborwalk Marina is new (still being built) with floating docks; a nice clean little marina and Harbormaster Chris Carroll's intent is to make it even better.

Taking a walk across town looking for a pharmacy, I took the scenic route. This old town is lovely. 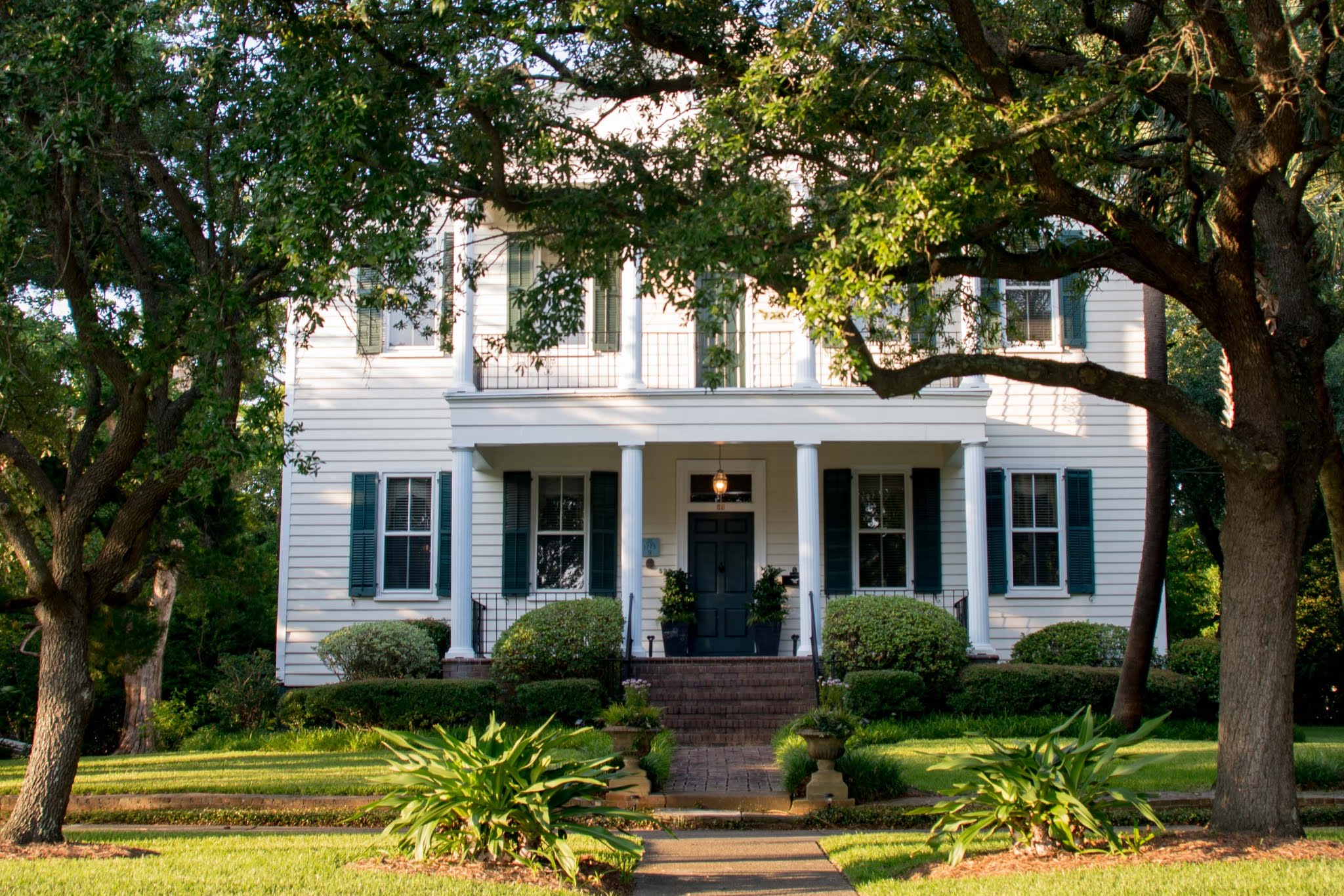 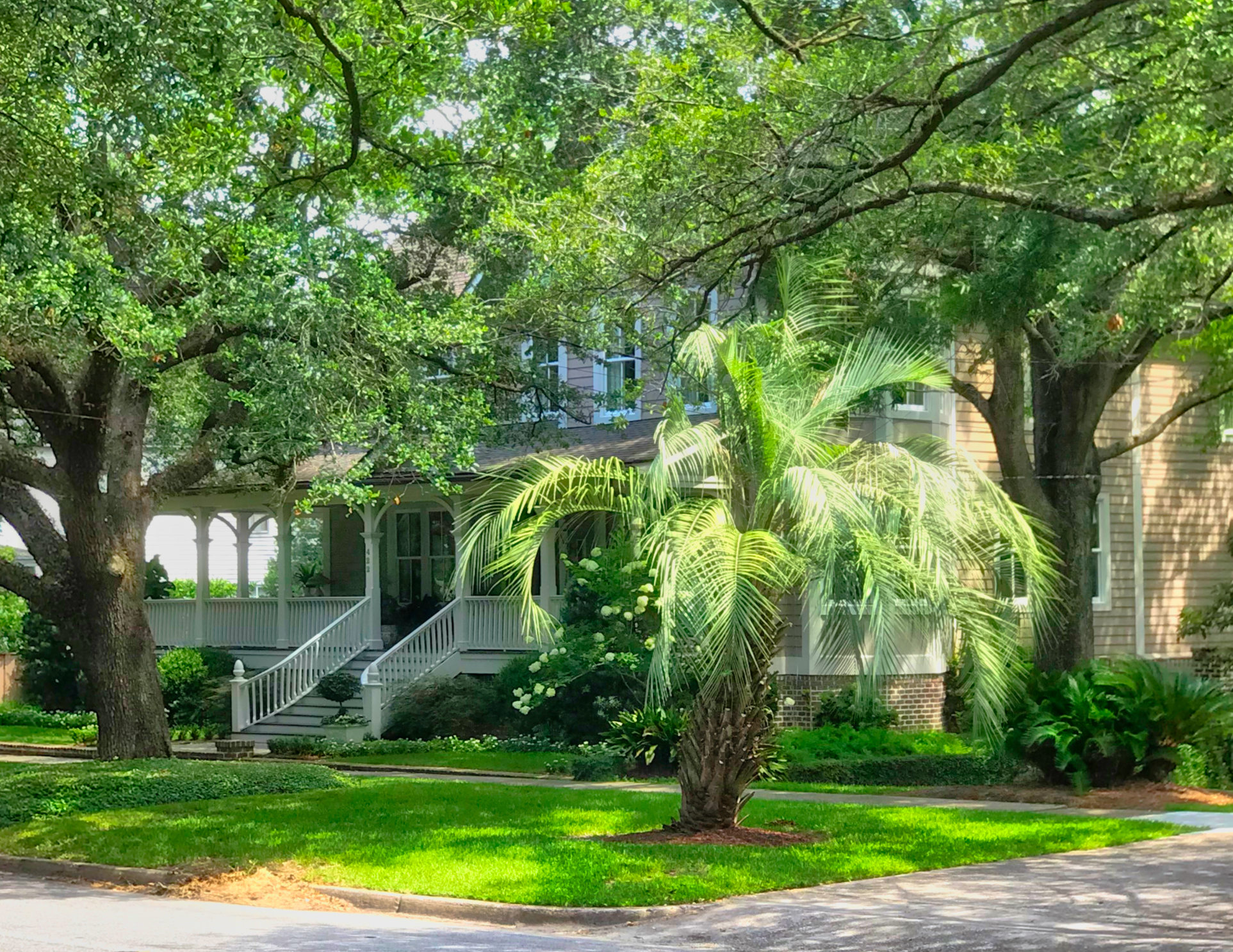 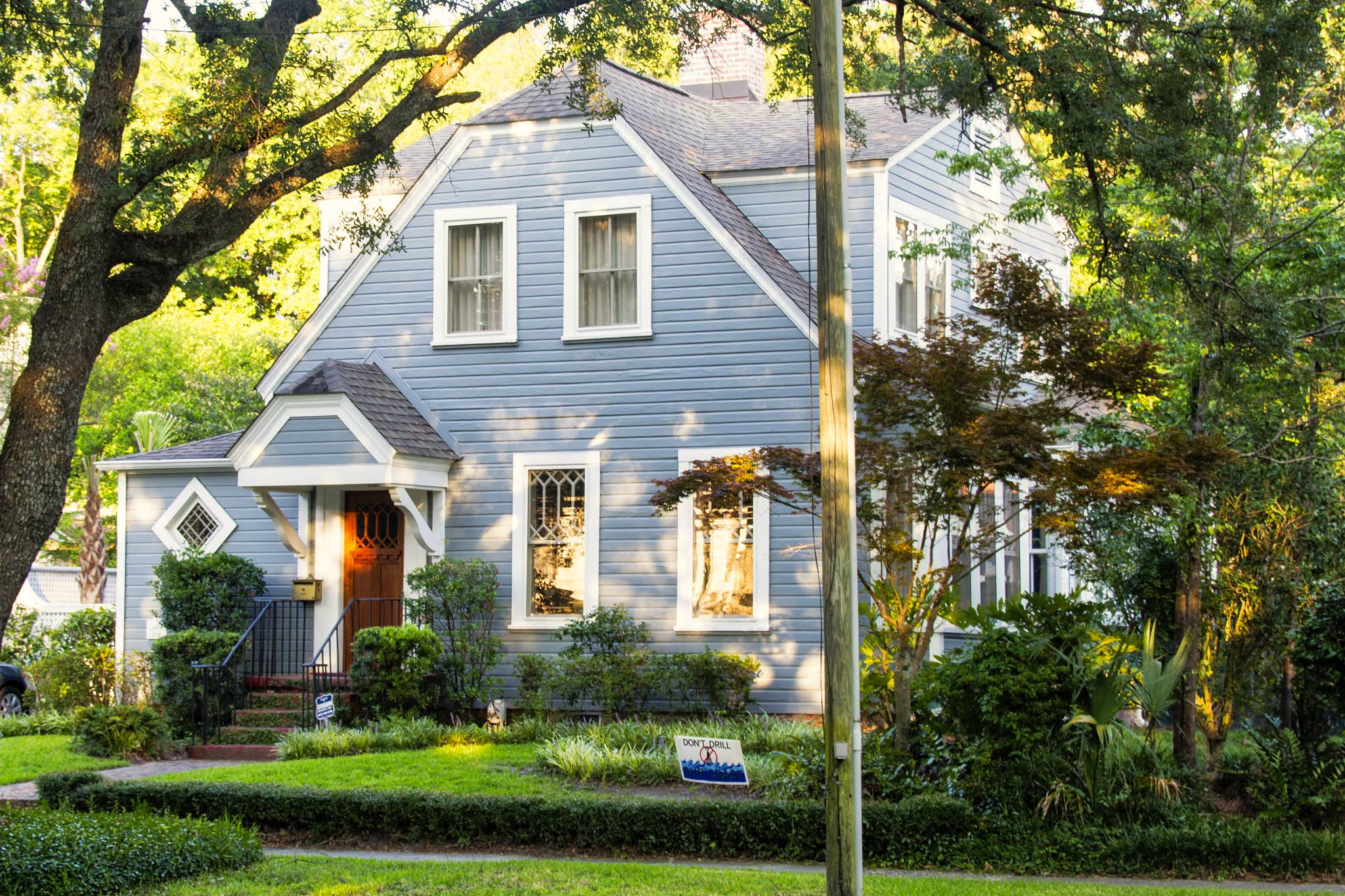 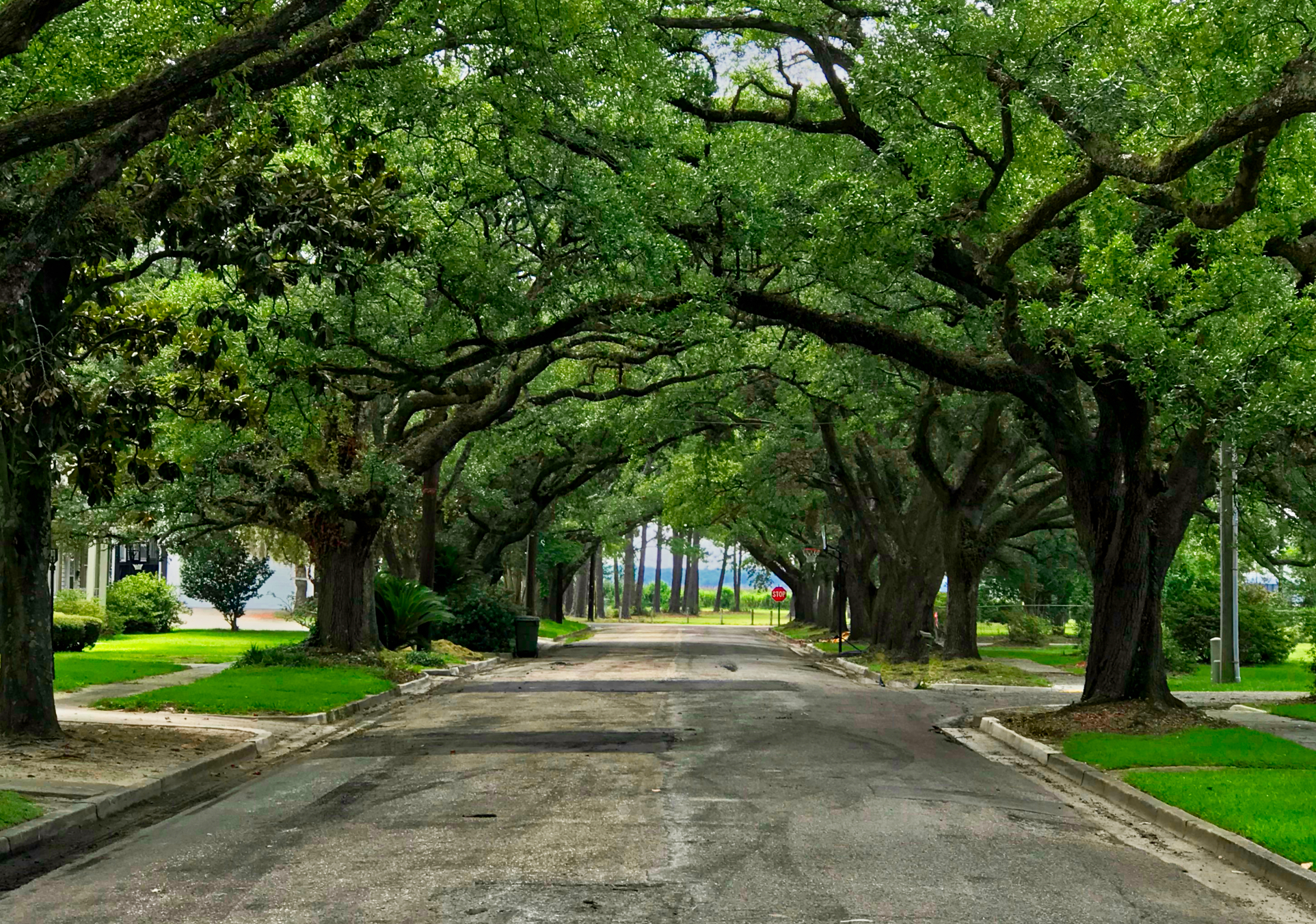 No, we're not sure when or where we'll be heading next. Mel would like to visit Bald Head Island at Cape Fear, she has a knack for picking good places  - so that seems likely.

In the meantime, life's pretty good.